Recently, Bitcoin (BTC) has been picking up momentum as the halving in May 2020 moves closer. However, large-cap Bitcoin forks namely, Bitcoin SV and Bitcoin Cash, will have their own halvings in April and the effects are already showing. This year, they gained 270% (BSV) and 132% (BCH) already, compared to Bitcoin’s 40%. 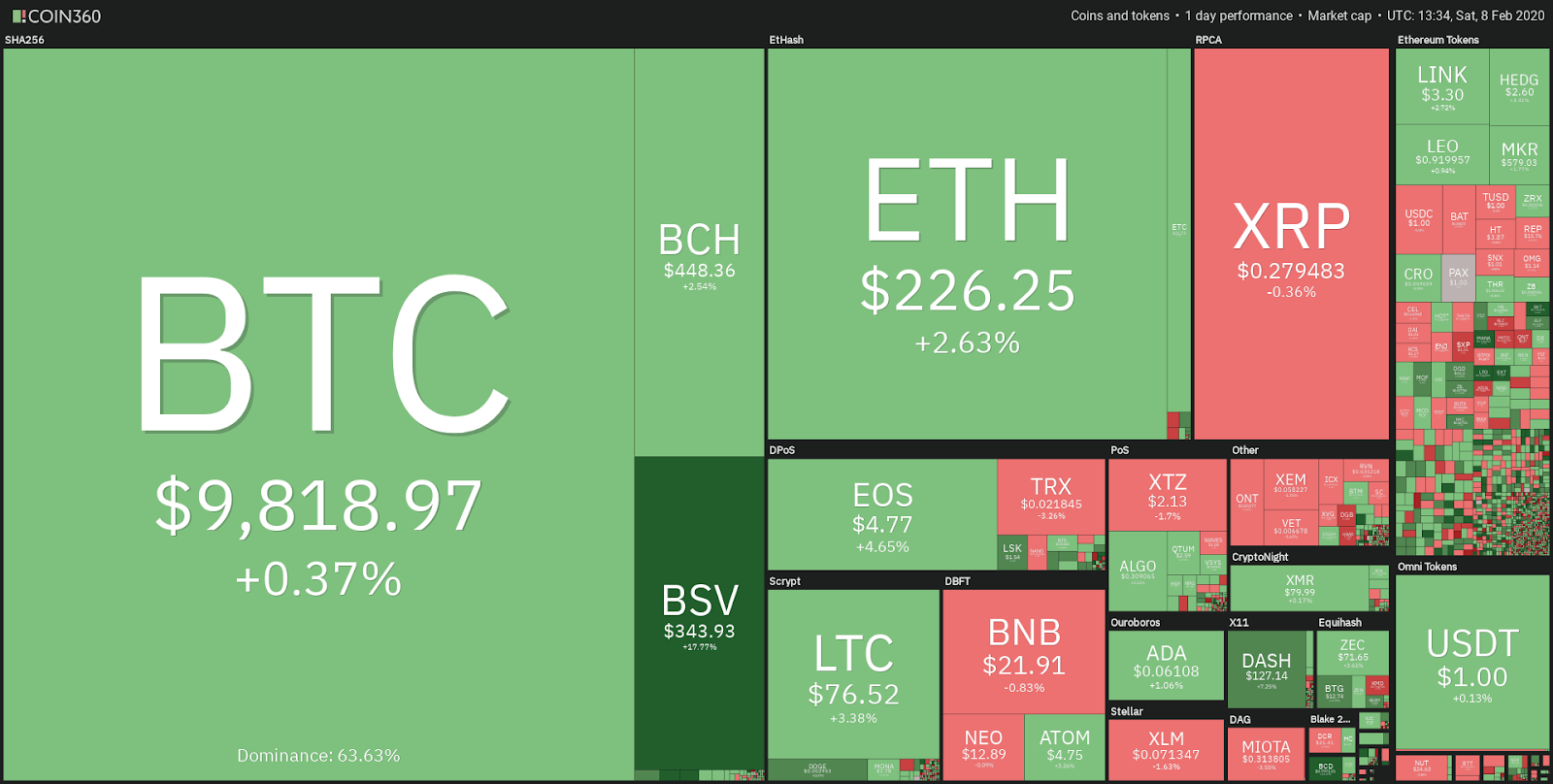 Bitcoin SV breaks out of downtrend 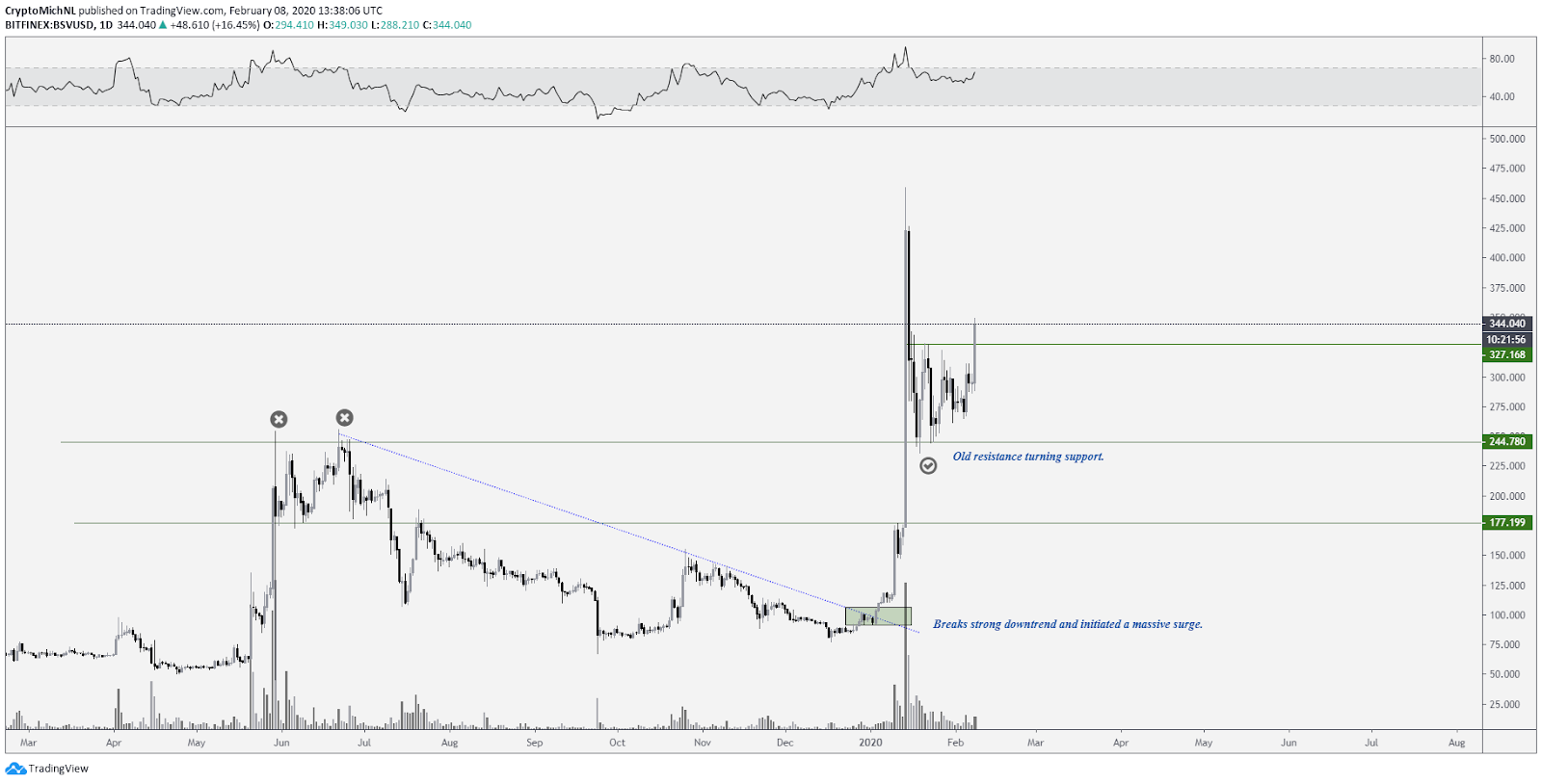 The USD chart of Bitcoin SV is showing an impressive breakout from the downtrend, which made the coin surge from $100 to $450, an increase of 350%.

Such a massive move upwards is always going to retrace as it’s unhealthy to go up in a straight line. The retracement occurred in the days after and seemingly found support at the $245 level.

The $245 level is significant, as the price of Bitcoin SV couldn’t break through this barrier earlier in June 2019. 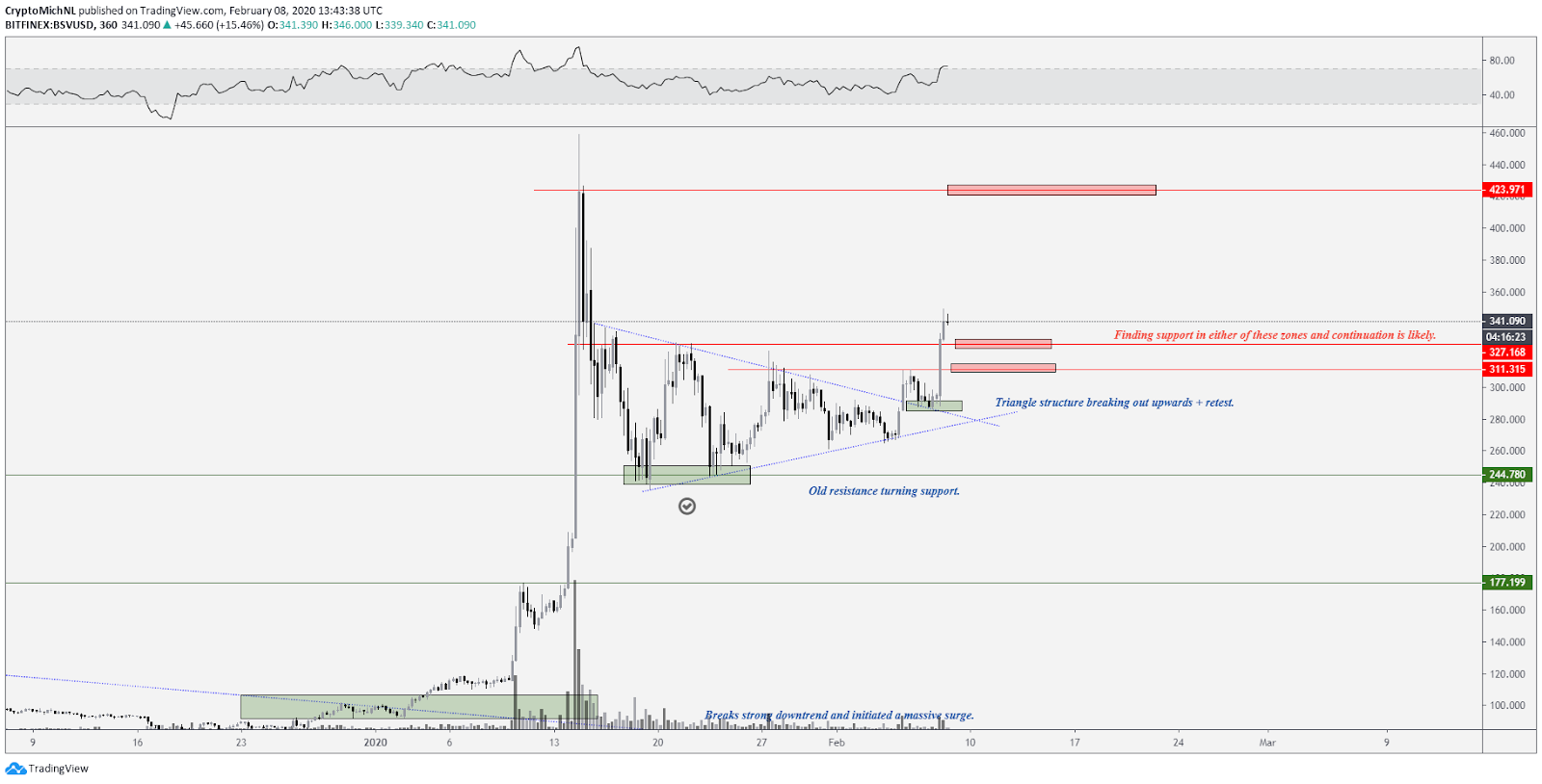 The 6-hour chart of Bitcoin SV is showing a triangle structure after the massive surge. The range was determined between $245 (support) and $325-330 (resistance), through which a symmetrical triangle formed.

The breakout occurred two days ago after which a retest confirmed the breakout. Currently, the price is hovering above the previous resistance at $310 and $327.

This price action paints an exciting structure. If Bitcoin SV can flip either of the two levels (preferably the $327 area) as support, continuation is warranted. Given that there are not many resistance levels in between, it’s likely to see this continuation lead towards the $425 area and the recent high. 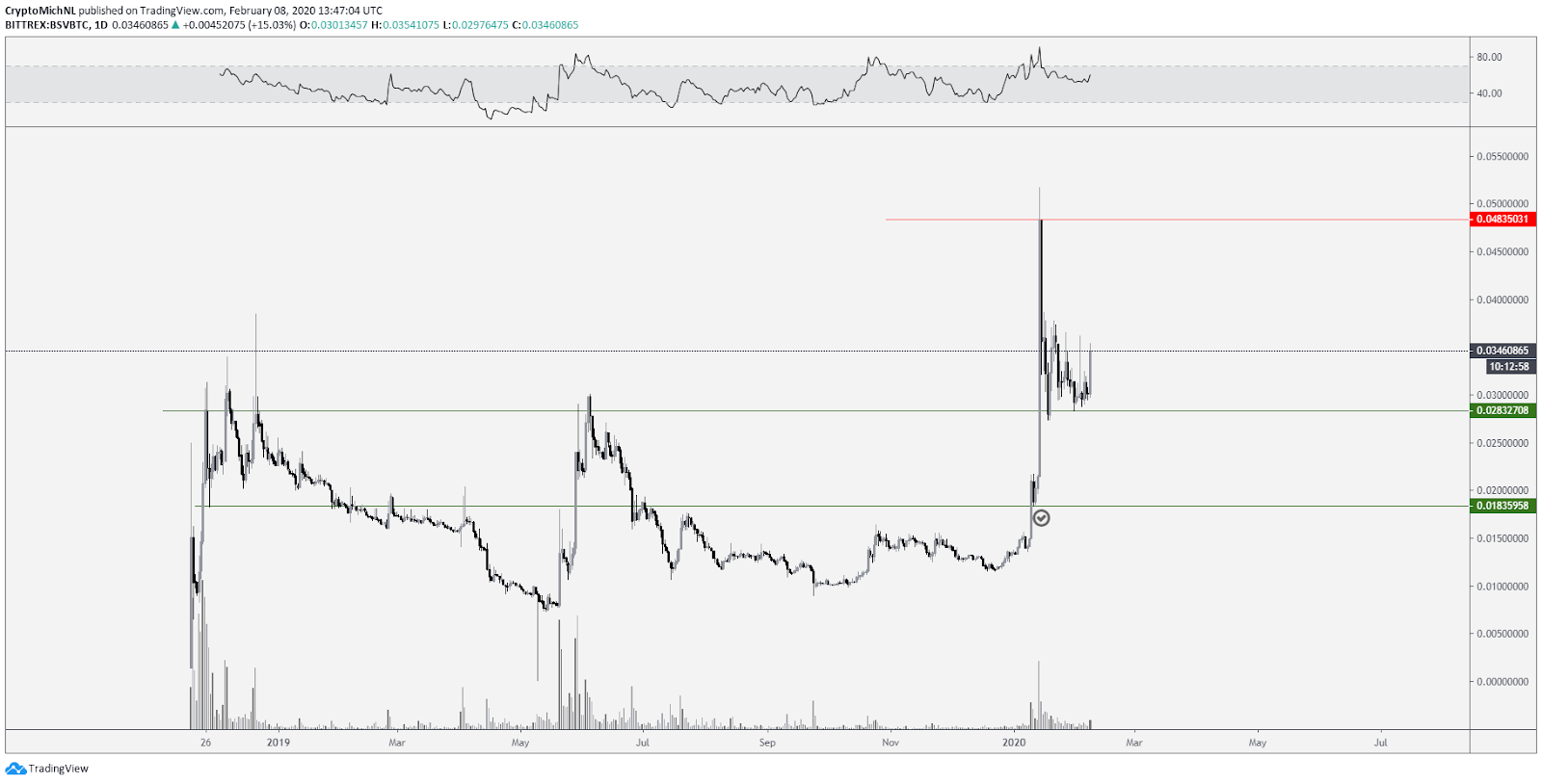 The BTC pair of Bitcoin SV is giving a similar view as the USD pair. Massive breakout upwards after Bitcoin SV turned the 0.01835 satoshis level in to support. The breakout also needed a retracement, which is found at the 0.0283 satoshis level.

The 0.0283 satoshis level was previously a substantial resistance to break, but right now, it’s turning into support. 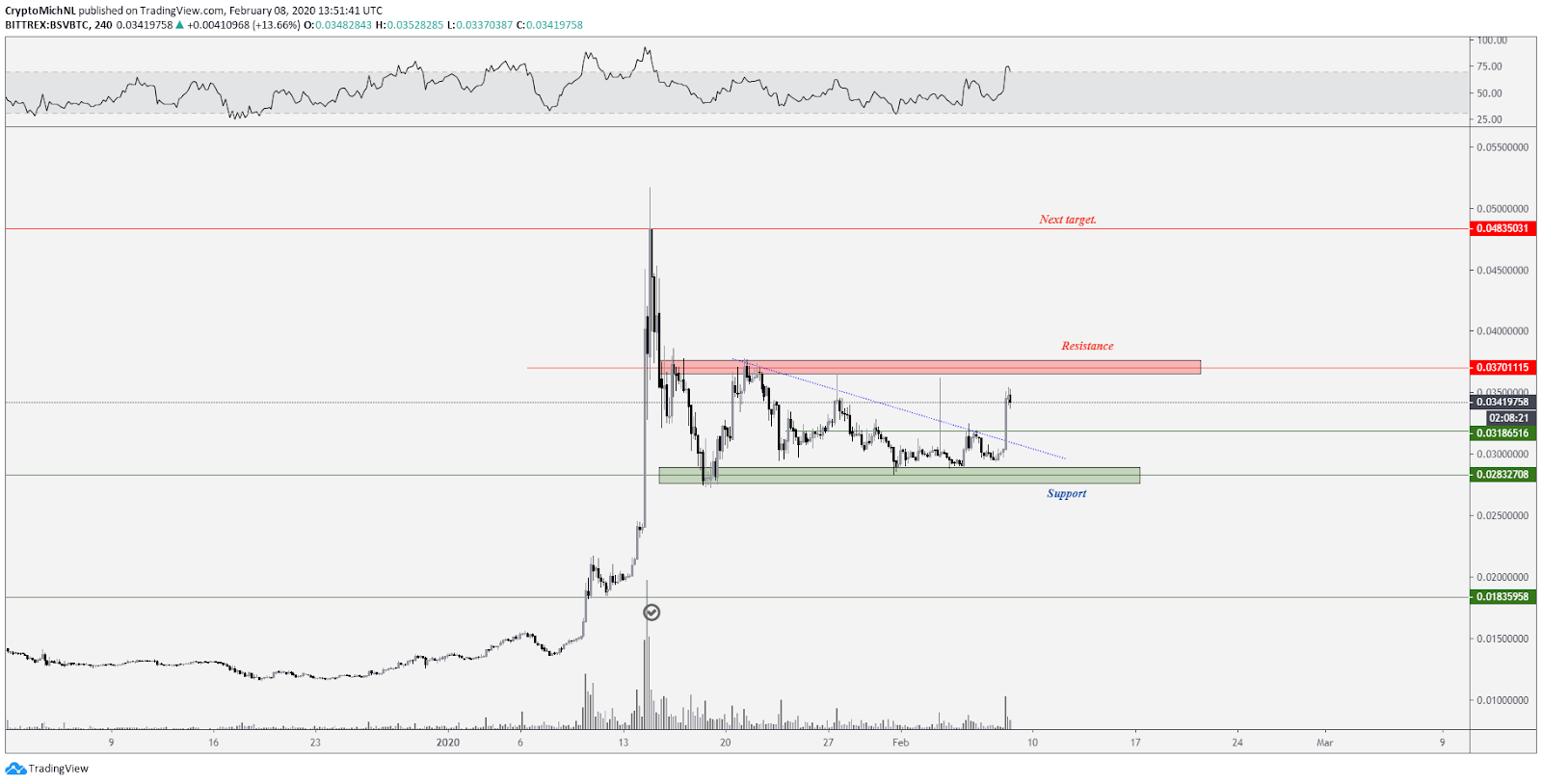 A small breakout from a downtrend occurred, which led to an increase of 18% today. However, the price of Bitcoin SV is still stuck in a range, which makes the direction unclear.

The price of Bitcoin SV could retest the 0.0318 satoshis level before continuing towards the range high at 0.037 satoshis. This level is the primary resistance to break. If the price can break through that level, continuation upwards is warranted, and a new test of the all-time highs at 0.0483 satoshis is likely to occur. 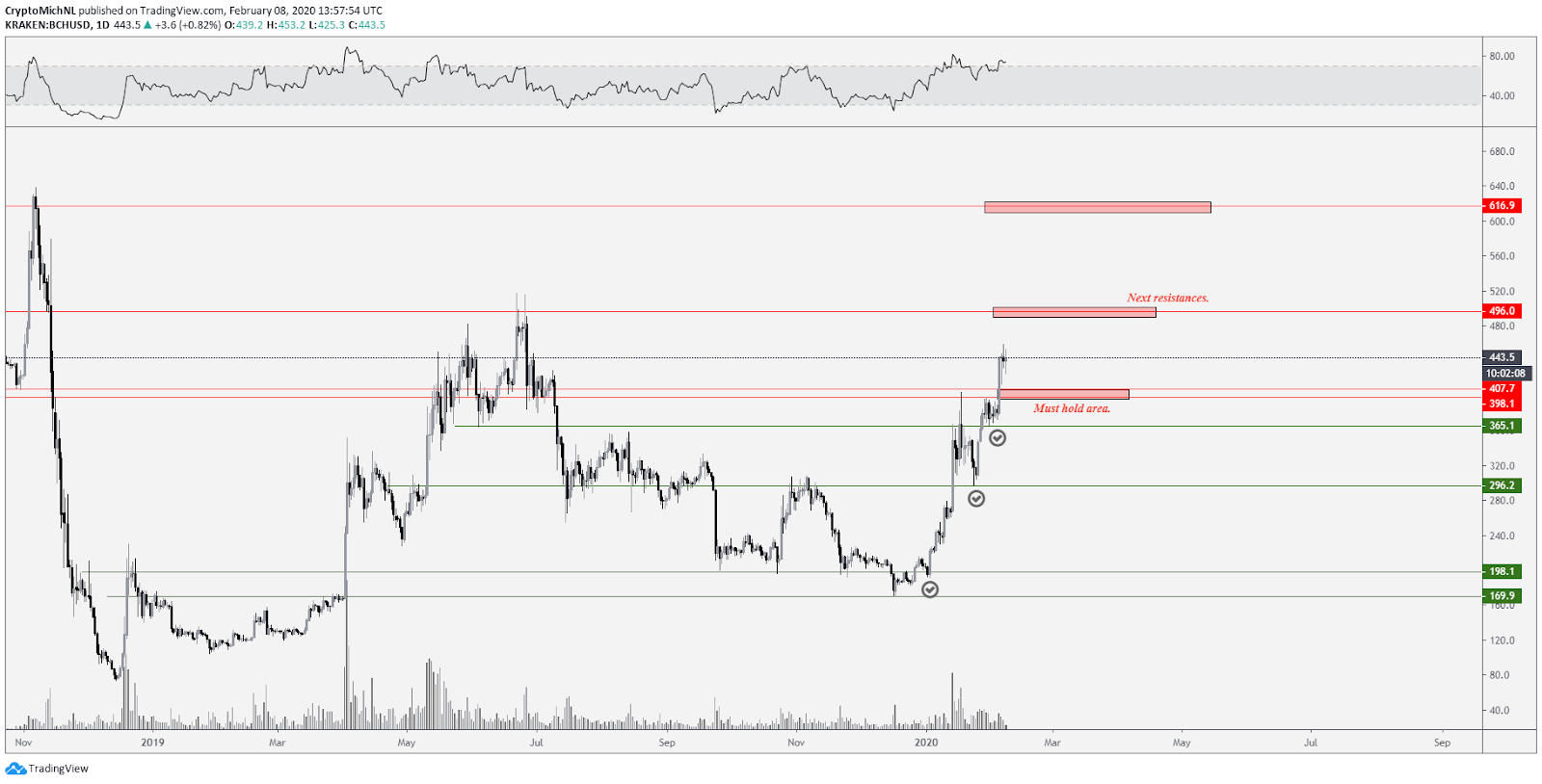 Not only is Bitcoin SV facing a halving but Bitcoin Cash is also going to have one in 59 days or 34 days earlier than Bitcoin. BCH made a strong upward move since the local bottom at $170, resulting in a price of $440 today.

During the upwards run, $296 and $365 levels flipped from resistance to support, which initiated the continuation of the upward trend.

A similar move could occur in the coming weeks as well. But while the level of $400-407 has not been tested yet, continuation will be warranted if Bitcoin Cash sees a test of this price level and buyers step into the market.

Such a continuation would lead to tests of the high at $496 and possibly lead to a move towards $615, as that’s the next resistance.

The 4-hour chart is showing a breakout above the $365 level on Jan. 28, which immediately flipped support.

After that, a bullish pennant construction enabled the continuation of the price, which made the price break through the $400 price barrier.

As stated previously, a retest didn’t occur yet. If it happens, that would be a potential zone to step in or to see confirmation of the upward trend continuation.

The Bitcoin pair of Bitcoin Cash is showing a clear breakout of the 0.042 satoshis level. This breakout was heavily needed in order to sustain the upward momentum.

Similar thoughts can be shared on this chart as on the USD chart. A retest of the 0.042 satoshis level would confirm the breakout to the upside. If such a retest occurs and confirms the breakout, continuation towards 0.053 and possibly 0.065 satoshis is on the table.

Not only Bitcoin SV and Bitcoin Cash have been showing strength lately, but other, smaller-cap hard forks of Bitcoin have also been doing the same. One example is Bitcoin Gold (BTG), which has seen a surge of 200% this year.

The chart shows a sharp support/resistance flip at the $9 and $10.65 levels, while it’s currently breaking out to the upside.

It’s likely to see a continuation towards the next resistance of $15.65 at which resistance can be expected.

In such a scenario, it’s expected to see a run-up before the event (the halving in this case), which quite often leads to a significant retrace or dropdown when the actual event takes place.

The views and opinions expressed here are solely those of the author and do not necessarily reflect the views of Cointelegraph. Every investment and trading move involves risk. You should conduct your own research when making a decision.