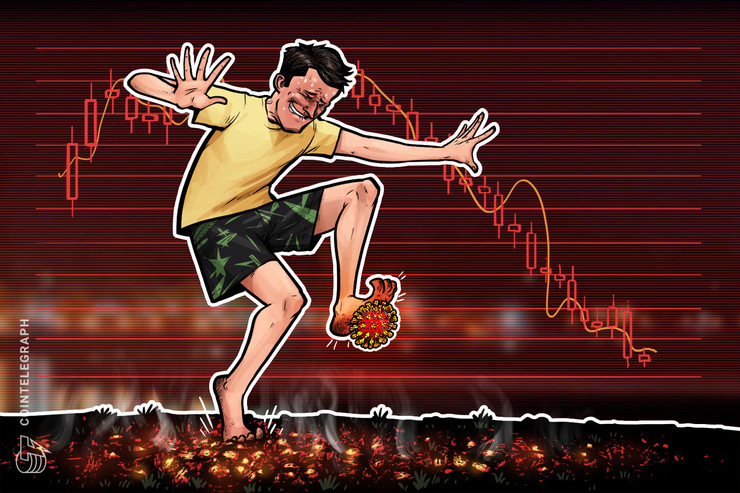 Analysts had predicted a recession for years and it should not come as a surprise, according to crypto-focused market research firm Crebaco.

Crebaco claims in a report shared with Cointelegraph that the recession that has taken hold of the markets was anticipated by many analysts over the last several years. The document reads:

“The Global markets have been correcting since [the] last few days. Some blame it on CoronaVirus, some curse on crude oil.”

As the report points out, Bitcoin (BTC) corrected by over 50% in 36 hours while the CAC, DAX, S&P500, Nasdaq, HK Stock Exchange and Nikkei and few other global equity markets collapsed at the same time by about 20% on average. Furthermore, oil-related stocks have also seen a downturn because of the price war on crude oil between Saudi Arabia and Russia.

According to Crebaco researchers, the U.S. economy is the best indicator as to whether a recession is taking place or not. Per the report, the U.S. yield curve — which consists of the long-term and short-term interest rates given by the treasury — is “an incredibly accurate tool for understanding and predicting recession and US economic conditions.” The document reads:

Crebaco researchers point out that the short term interest rates are currently about 0.5% for 10 year and 1% for 30 years, on average. The firm also suggests that a recession was due since the historical charts suggest that one correction of the global financial markets takes place every 10 years, on average.

Bitcoin failed to perform as a safe haven

Bitcoin is often called digital gold by many of its proponents, who suggest that it is a digital alternative to the most popular safe haven asset. Still, the report points out that “all were struck by surprise when Bitcoin fell by 50% in 36 hours.”

The researchers suggest that the reason why Bitcoin reacted so violently to the market downturn was because the Bitcoin and crypto market size was less than $265 billion dollars at the time, while global economies were in trillions of dollars. The report reads:

“It is too tiny to handle something like this as it is Bitcoin’s first recession. Due to the market size, institutions were not involved in trading and providing liquidity to the crypto market. The market plummeted due to the spread in trade prices at several exchanges which trade digital assets like Bitcoin.”

In other words, Crebaco researchers suggest that “the market fell drastically as there was a very thin order book in major exchanges and they didn't have liquidity providers to support the sudden crash.” Still, researchers point out that also the king among safe haven assets — gold — corrected by about 8.5% in two days “which is massive for a 3000 year old stable commodity.”

Still, some suggest that Bitcoin could have a hard time recovering after this correction. Notorious Bitcoin bull and Galaxy Digital CEO Mike Novogratz recently suggested that investors have lost confidence in Bitcoin. He said:

“[Bitcoin] was always a confidence game. All crypto is. And it appears global confidence in just about anything has evaporated.”