Bitcoin (BTC) saw a difficult week as it hit one-month lows, but on gold markets, traders were nursing the biggest daily falls in over seven years.

According to data tracking XAU/USD on Feb. 29, Friday saw the precious metal’s worst 24-hour drop since 2013.

Over the past five days, gold broadly succumbed to the sell-offs affecting traditional markets due to the ongoing coronavirus outbreak. Between Feb. 24 and Feb. 29, XAU/USD lost a total of 7.3% before a slight rebound.

The fragile performance puts gold roughly on par with “digital gold,” Bitcoin, the weekly losses for which currently stand at around 9%. 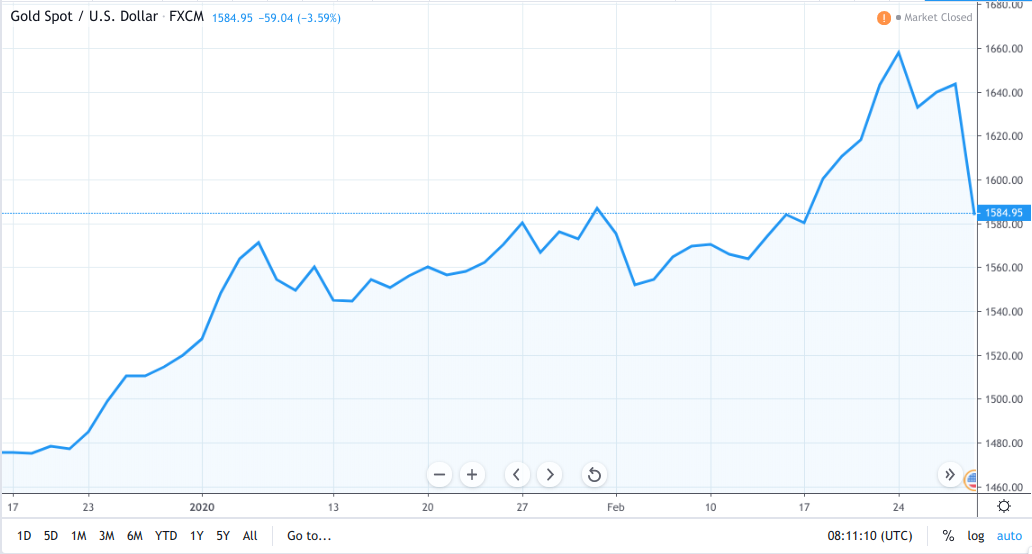 As Cointelegraph reported, after rebounding from 4-week lows of $8,450, the largest cryptocurrency returned to its forecast average price and has since attempted to reclaim its 200-day moving average near $8,800.

While gold remained steadfast in a plummeting stock market, its proponents had cause for celebration. Gold bug and infamous Bitcoin skeptic, Peter Schiff, took the opportunity to rubbish those who believed BTC could act as a safe haven.

Following the U-turn in its fortunes, Schiff remained convinced in gold’s promise, while acknowledging such drops were “very rare.”

“Today's 4% drop in gold is a very rare move in a single day. But it does happen occasionally,” he wrote in a tweet on Friday.

“However a 4% drop in @Bitcoin is quite common,  which often posts daily declines much larger. Today's move doesn't invalidate gold's safe haven or long-term store of value status.”

Bitcoin figures, notably Schiff’s sparring partner Morgan Creek Digital co-founder Anthony Pompliano, had wryly suggested that someone should “check on” him as gold’s own health waned.

Stock market misery meanwhile continues after the Dow Jones suffered its own record-breaking daily loss on Wednesday. Traders have since overwhelmingly bet on the United States Federal Reserve cutting its short-term interest rate target significantly in 2020.